The Pageant by Leigh Walker 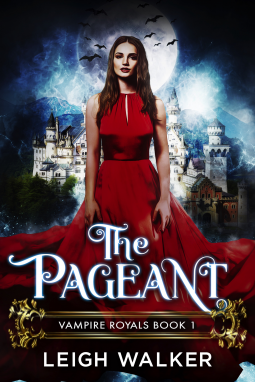 Young women from every settlement in the land are being handpicked to enter The Pageant, a contest reminiscent of Miss Universe from the old days. Gwyneth West's social-climbing mother wants her to compete, but Gwyn isn't so sure...


The Pageant is government-sponsored. If you're lucky enough to be chosen, participation is mandatory. Aggressive competition is allowed, even encouraged. And then there's the prize... Dallas Black, otherwise known as The Dark Prince, will propose to the winner.
Dallas is the son of King Black, who won the last world war and governs the new settlements. The Royal Family is mysterious. Rumor has it they don't sleep. Rumor has it they eschew the sun. Rumor has it they're immortal.
When Gwyn is thrust into The Pageant, she fights to survive the competitive nature of the other contestants. But even if she wins...can she survive a vampire fiancé?

This book has a lot of similarities to the Selection Series by Kiera Cass. I loved The Selection series and so obviously i loved this series.

Its a sort of hybrid between the Selection Series by Kiera Cass and The Dark Heroine series by Abigail Gibbs. I loved both of these books so I think I am the perfect target audience for this series.

I enjoyed getting to know all of the characters especially Dallas and Gwyneth I thought they were very interesting and likable as characters. I love that Gwyn is brave and a bit of a rule breaker and that Dallas still finds her interesting anyway.
I thought that maybe the Vampires would be a bit much however they definitely give the story an exciting twist.

I liked the writing style and thought it was super easy to read. I started this mistakenly before bed and then didn't get any sleep because i was reading.

I loved this original take on a story I love and I can see that the series will go somewhere really exciting. I cant wait to read the whole series. I honestly will be keeping my eye out for the next installment.

I gave this book a 5* on GoodReads because I was in love with it. Do yourself a favour and pick this up.