Come sit by me by Thomas Hoobler 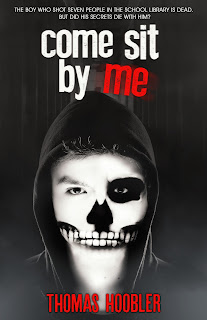 Paul transfers schools to Hamilton High after his mum died. The houses in the area because of a terrible thing that happened in the school a year before Paul arrives. A boy named Cale shot seven people in the school library but nobody ever really found out why.
Paul gets given the shooters old locker and gets obsessive with the discovery of the reason behind the massacre.

The plot of this book really tickled my fancy. I thought the whole massacre story was a great idea and then making it a sort of a who done it was genius.
The characters were interesting, there was somebody for everyone to relate to and we kind of learn that the people that we least expect can be the bad guys.

Its a super quick speedy read because it is so interesting you get caught up in the plot and the characters. The writer had a quirky style and I rarely read books written by men so this was a great opportunity for me.

My only negative was reading Caleb's story because of the style it was written in. The style of writing made complete sense but i found it tricky to keep up with and if he was typing on a laptop could he not have used spell check? But that aside it was interesting to have this other perspective within the book.

Over all its a thumbs up from me.