Right where you are by L.E. Bross 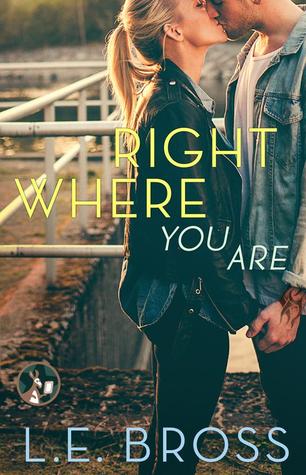 Avery Melrose is used to having it all. So when her boyfriend cheats on her, she reacts like any spoiled rich girl-she freaks out and vandalizes his new truck, Carrie Underwood style. Now she's stuck with 300 hours of community service doing road-side garbage duty.
Seth Hunter just got out of prison, and after a few hundred hours picking up litter on the side of the highway, he can finally put his mistakes behind him. If he can string together some kind of existence, maybe it'll be enough to get his sister away from their stepfather, the man who sent Seth to prison in the first place.A romance between these two is doomed from the start. Girls like Avery want castles and white horses, and Seth is no prince charming.But sometimes, being around Avery makes Seth think he could make something of himself. Maybe even be worthy of a girl like her. It's just too bad real life gets in the way first, tearing these two apart before they have any chance of getting to Happily Ever After.

I was expecting the story to be a bit cheesy but it wasn't it was lovely. It is kind of your average rich girl meets poor bad boy story but its a lot better than normal as well. There was obviously the romance that ran through the book and this was the main focus, it didn't need anything else to make it exciting it just was.

The relationship between Seth and Avery develops so nicely that it is hard to not care for them. Avery is wealthy and has everything that she would ever need at the drop of a hat. I quite liked the little princess routine at the beginning because I thought she was interesting if not a little arrogant but it made her different to the nicey nicey average lead girls you normally find in new adult books. Avery went psycho when she found her boyfriend cheating on her and ended up doing community service. For me Avery grew a lot during the story, she went from a little daddies girl to an adult who knew what she wanted for herself and that she was just going to go out and grab what she wanted instead of waiting for her parents plan for her to come together.

Seth was a convict, a bad boy but not really. I like that he was a bit of a player before prison. He was a little irritating about half way through the story Seth got extremely soppy with Avery. He began to call her Babe a lot and we know how I hate reading that. Personally this lovely dovey behaviour didn't strike me as how Seth would have acted, possessive maybe yes, protective definitely after everything that has happened in his life but mushy not really but hey that's just my opinion.

I think Bross did an excellent job at creating two characters that complement each other so perfectly that it seems crazy that they would not be together. Avery is the calm to Seth's crazy and he helps her discover herself.

I really enjoyed Right Where You Are. I was kindly sent this book in return for an honest review.