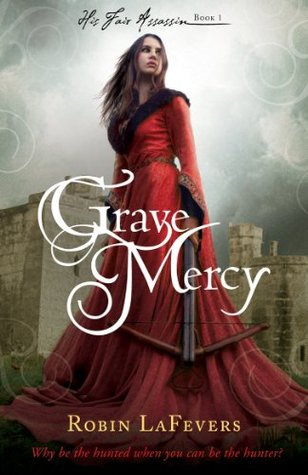 
Trained as an assassin by the god of Death, Ismae is sent to the court of Brittany, where she finds herself under prepared - not only for the games of intrigue and treason, but for the impossible choices she must make. For how can she deliver Death's vengeance upon a target who, against her will, has stolen her heart?
A dangerous romance full of intrigue, poison and ultimately finding one's way.

Ismae is our main character in this story, she had a bit of a rubbishy start to her life to be honest. Her dad tried to abort her and when that failed he treated her like rubbish for her whole life until he sold her on to another man so that her could continue to treat her badly.
Thank god or Death i suppose that Ismae was saved. Ismae really grew as a character in the convent but I most loved her once she had met Duval. I think he helped to challenge her and make Ismae work out things about herself that she hadn't before.
I loved the characters and their progression throughout this story. I felt as though the plot was really well though out and that the characters were all really realistic and relatable. I was a little worried going into this that the era the book is set in would throw me off because I am not used to reading books set in history but to be honest it didnt really make a difference to most of the story anyway.
I dont want to spoil anything so I am going to try my best not to but I do want to talk about this one specific part of the book. So Duval goes through some difficulties and Ismae spends quite a bit of time trying to figure out why. I figured this out the second he started having problems what was happening, Ismae was given all of the same answers that I was so it annoyed me that it took her so long.
I wont be continuing with this series because the next book is not based around Ismae and Duval it is instead based around another girl from the convent. I don't feel as invested in the other characters so  I will not spend time on it.

I would recommend this book though.
Thanks for Reading
Emx
Emmacoxy88@gmail.com